Join Rear Admiral Dan MacDonnell (Ret.) and Randori Co-Founder & CTO David Wolpoff as they guide security leaders through the steps to take to withstand the current cyber conflict. During this fireside chat they’ll talk through how to have a productive conversation with your leadership to move your security program up the maturity scale. They’ll cover tactical advice on how to get back to basics, and increase your maturity with the team and the tools you already have.

Dan MacDonnell is the former deputy chief of the National Security Agency (NSA)/Central Security Service, (CSS). He is also the former Chief Resilience Officer at State Street, giving him a unique blend of defense and private sector experience. In his role at State Street, MacDonnell applied his offensive mindset to his role as a defender, helping the company’s security organization become more proactive and anticipatory rather than reactive.

David Wolpoff (moose) was a top ten red-teamer the three letter government agencies relied on, and in this role he advised Nakasone-type leadership on hacking techniques used by nation-states and cybercriminals. He's a prolific writer, with a blog on medium a–following him at hexadecimoose.medium.com 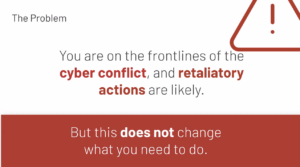